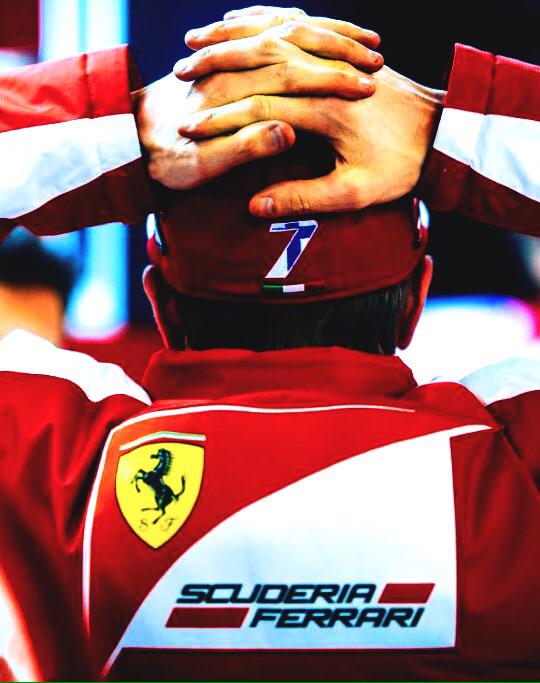 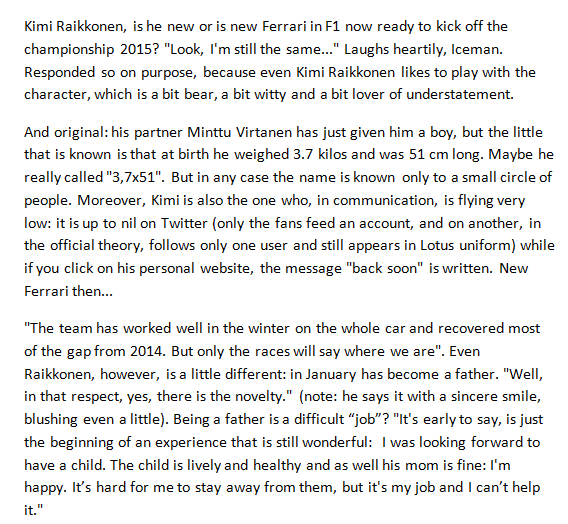 ..possible stay '16?
K: "It's early, before it concerns me to find the 'performance' on track. There will be time to talk about certain things."

Will Ferrari really be first challenger of Mercedes, maybe even beat or will that need a miracle?
K: "We'll try. Working as we know, perhaps we don't need a miracle: we do the right things, the results will come."

..positives of 2015?
K: "The fact that the car responds well: work and sacrifices will be rewarded. I speak in general: Ferrari today is better than 2014. I expect a lot from ourselves and I look forward to decisive progress "

Kimi about changes in team
K: "I don't judge. But to make a real turnaround it's necessary to make a decisive change. I also imagine that there were good reasons to change so much."

O problemina sa F14T 2014.g:
K: "More than anything I was struck by another aspect, we realized too early how this would be going to end."

Kimi asked about Enzo's words that becoming a father makes a driver slower..
K: "It will be tough to be slower than last year"

Villeneuve saying there can't be friendship between drivers..
K: "Jaques speaks often and likes to provoke, Seb and I know each other well. We are happy to be together in Ferrari. We push each other to bring the team where it should be."

Kimi says it will be better now that he has a team mate he gets along and probably less awkward:
K: "well, there will be differences . But the key thing is not what Seb and I will say but how everybody will work. In sport only one can will and everybody else are losers. So not winning is part of the game. But it's never fun and we tried to fight. Also in defeat we learnt a lot." 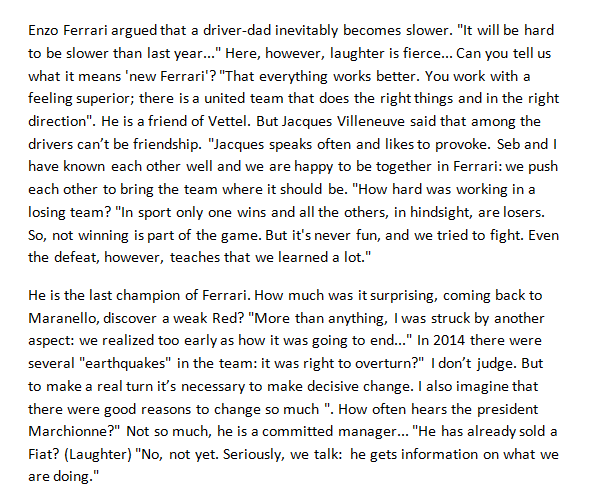 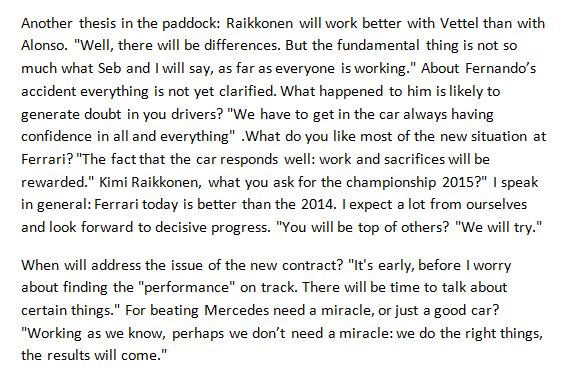 “Robin & I are supporting the best dad in the world for the season opening competition in Australia. We shall be watching the race on the TV this time but we can’t wait to take a part in the European races.” (Minttu on Instagram) winner of the best face in Malaysia goes to....
http://www.enterf1.com/blog/winner-of-t ... ia-goes-to 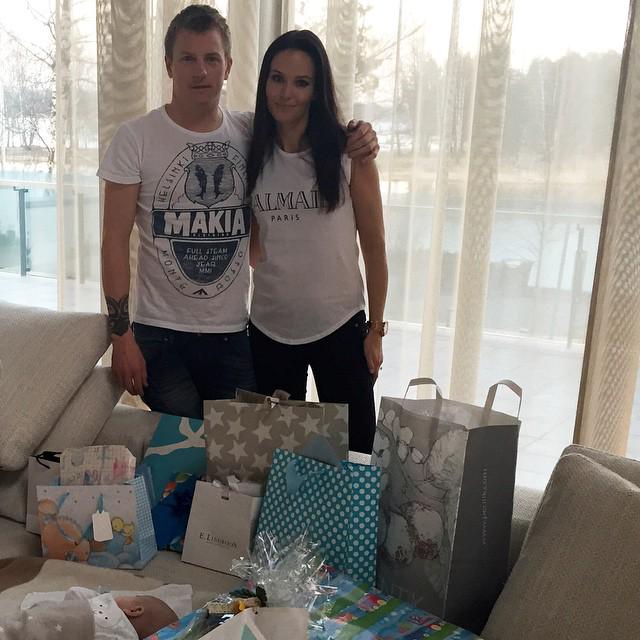 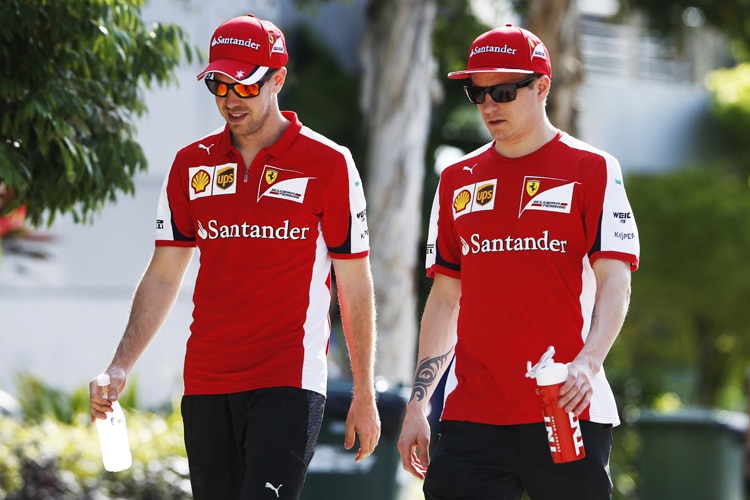 Kimi, how confident you are in front of the race weekend of Shanghai?
If we have a clean weekend, then it should run fine. With clean I mean - no technical problems that set us back in training, no enemies that come your way and hinder us in qualifying. Shanghai is of course a very different route than Melbourne and Sepang. But I guess we have a car that is competitive on any type of track. Until now, it was certainly so, and I see no reason why that should change now.

Are you satisfied with your performance?
Even if it has not run optimally on the results here, I am satisfied with my performance. In Sepang, there was a collision, a plate, a damaged subfloor. That was for the handling of the car is not necessarily good. However, I was able to finish fourth. In Australia, I made a mistake in qualifying, otherwise I'm happy with me.

It seems that we have here in China as conditions during winter testing, so rather cool. What does this mean?
Whether Jerez and Barcelona, ​​whether or Melbourne Sepang, the Ferrari was all good. Of course it has an effect if it is not as hot here as in Malaysia. The Circuit of Shanghai Barcelona resembles more than any other track on which we are so far gone with this car. Certainty you have of course always. After the race, so I can say more tomorrow, but I expect no surprises

You know Sebastian Vettel already long as a buddy. How is he as team mate?
Now I don't think that as a teammate he is different. That's what I expect so. Sure he stands out from my previous team mates. He has his very own way of working. And that's good for me, because I can learn too.

Many believe: The good performance of Ferrari in Malaysia was only possible due to the large heat.
Once again - we had unlimited travel in Australia, we would be located in the target much closer to the Mercedes. We were never meant as much of the silver arrows away like some people. We are not yet where we want to be. But we are to miles further than a year ago. We are well on our way.
Bolje pet do dvanaest nego ni jednu poslje jedan. Yes, The Force is with me